So... this was really awesome. This summer, I started following the #YouMatter movement on twitter, especially checking out the amazing bulletin board and other welcoming messages to students to start the year with this critical message: The World NEEDS Your Contribution! However, most of the messages seemed very primary-grades-focused, and I spent a chunk of angst worrying that my middle schoolers would find such messages cheesy or inauthentic... But I swallowed my nerves, and created this giant poster welcoming my students to my science classroom (which is also my "advisor" class's homeroom). 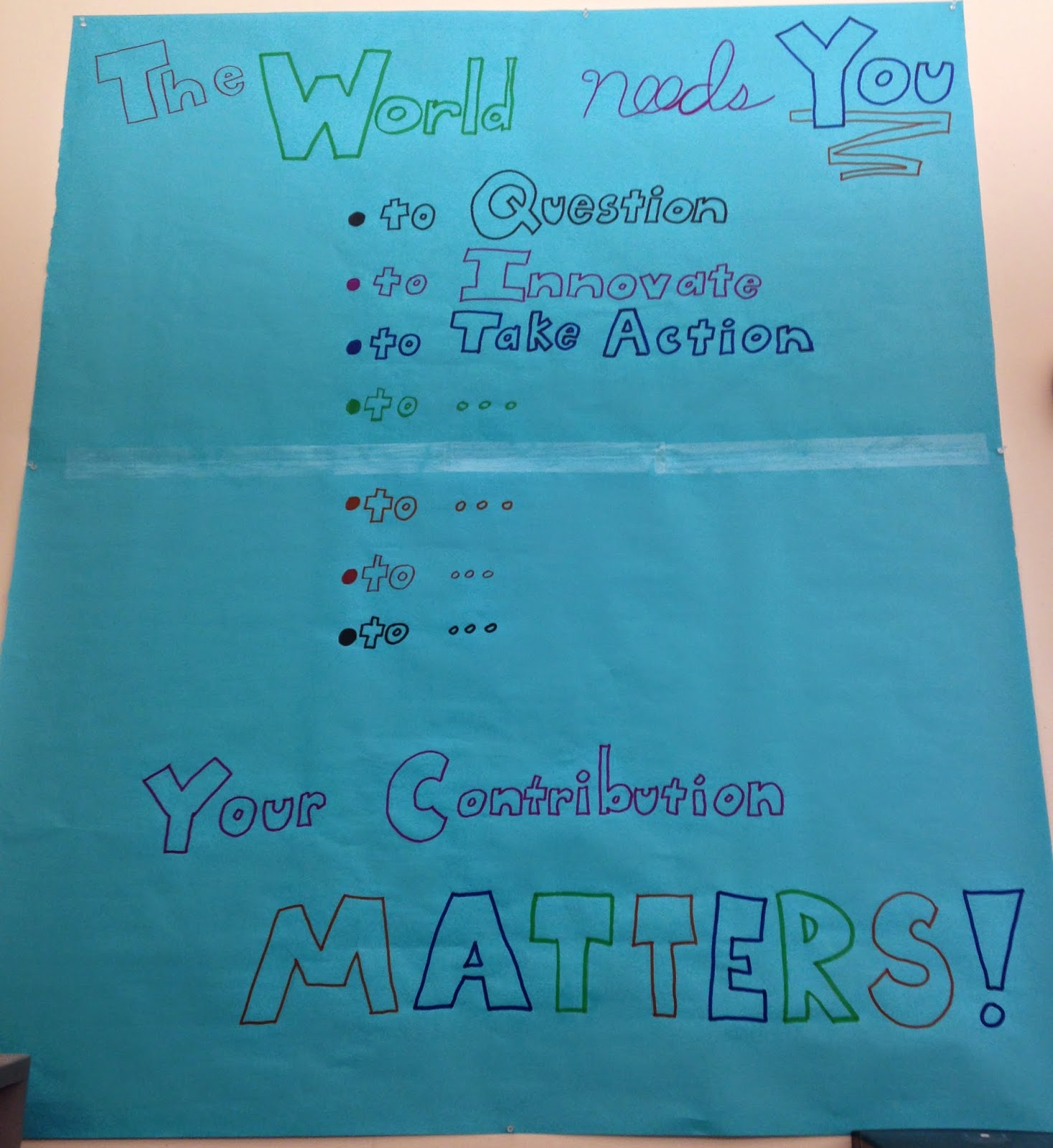 Along with this, the teacher who shares our science room and I did some significant re-arranging of our learning space... the most important of which is that we moved the work tables back away from the whiteboard to leave a large open space. Now, we start almost every class with a circle of chairs near the whiteboard for discussions and launching into new ideas! This showed immediate effects from day 1, with students sharing more readily and the quieter kiddos already speaking up more... an intimate conversation rather than shouting from all the way across the (actually quite cavernous) classroom.

Here's how the first days of science class went:

1) Students arrived to their name-labeled science binders ("assigned seats") and a clipboard with paper on their chairs. Arrival and seating was easy-peasy.

2) The kiddos immediately wanted to know what "kind" of science we'd be studying this year, which was a perfect segueway... We talked a teeny bit about life sciences and what all that entails, but then I asked them to zoom way way out to think about science in general... What *is* science? What links everything that *is* science together? If you tell someone you're a scientist, what are you telling them? I asked my students to divide their paper in half and to take two minutes silently writing out their own answers to those questions in the top half. (Hello, Think-Pair-Share!)

3) I then invited the kids to share their ideas with a neighbor for about a minute, then to add any new ideas they got from their neighbor to their own answers.

4) Rather than having them do the full share as a group, I made three posters that I spread around the room: "Science Is..." NOUNS, "Science Is..." VERBS, and "Science Is..." ADJECTIVES. I asked the kids to share with the whole class by silently walking around to the three posters and add their own nouns, verbs, and adjectives to each poster. Silently because that would allow everyone to get their ideas out without being distracted, and would let everyone read without being influenced by other people's comments.  The results were impressive, and significantly not domain-specific! The lists were not dominated by "animals and plants" or "electricity" or other "types" of science. 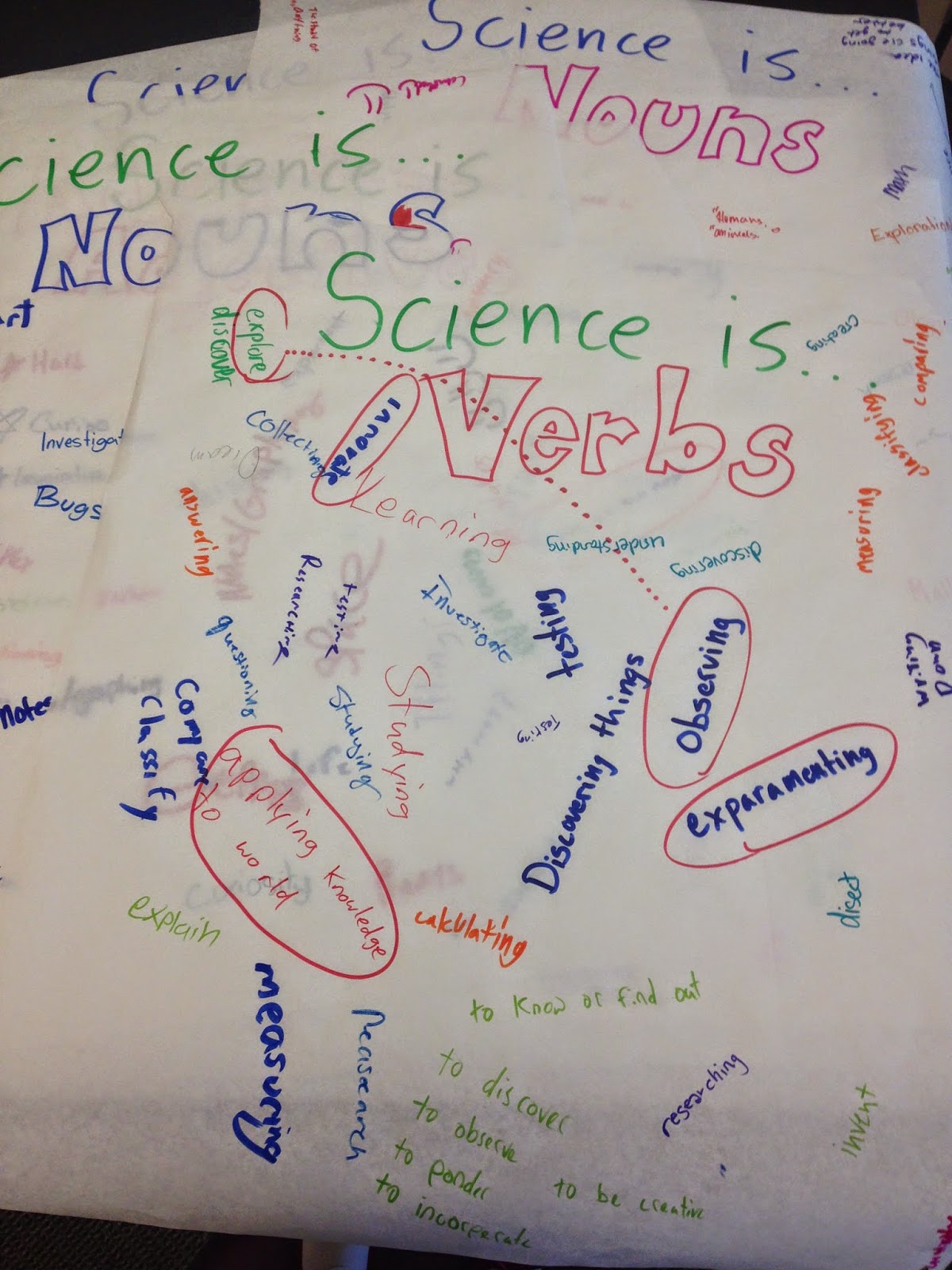 5) Next, we visited each poster together as a whole class, and I asked students to identify a comment written by someone else that they thought was particularly important, and why! Some great conversations came out of this, such as the difference between "ponder" and "wonder," and how the verb "to hope" is an important part of science!

6) Finally, I officially introduced the kiddos to that giant poster pictured at the top of this post... and talked about how the actions taken by scientists are the kinds of actions that *everyone!* needs to take. I asked kids to share how the three first actions - Question, Innovate, and Take Action - related to science, but also to every day life. I told them that each class would choose two or three additional actions that the world NEEDS them to take, and we'd nominate and vote on options.

7) On the bottom half of that sheet where they earlier wrote their initial definitions of science, students individually brainstormed what actions they would offer to the class brainstorm list.  Back in our circle of chairs by the whiteboard, students recorded a giant list of those actions - approximately 30 for each class. We then narrowed and narrowed and narrowed until the class agreed on two or three that would be *their class's* offerings to the poster.

8) Following voting, each student wrote their name on a slip of paper that would constitute their "signing" this giant document as our contract for the year, and as our highest goals for moving forward in the world! 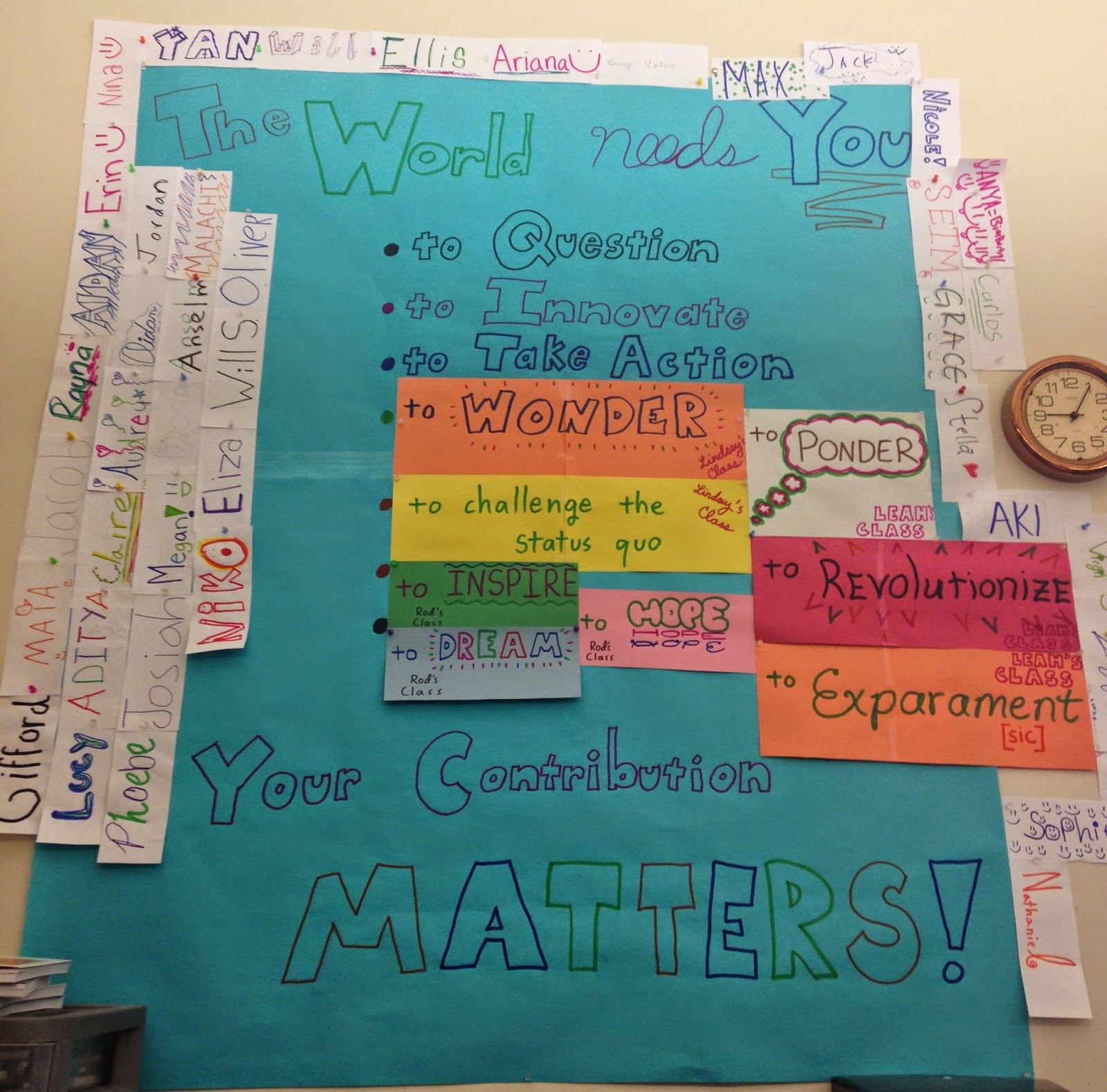 I think it's beautiful! And the kiddos are *totally* bought in. They see their importance in the world, and they are prepared to take on the responsibility that comes with the world NEEDING their contribution!

Next week, we're spending the whole week at "7th grade camp" - near the site of the huge Elwha River restoration project, one of the biggest ecological restoration projects on the planet. The kiddos have begun articulating questions, we've begun sorting them using NoTosh's Googleable/NonGoogleable procedure, and today we'll sort a level further to Bloom's Taxonomy. They are preparing to ask questions and launch into a major PBL to answer some IMPORTANT questions stemmed from our experiences in the Elwha. (I'm also using lots of resources from the Buck Institute for Education in my own preparation.) 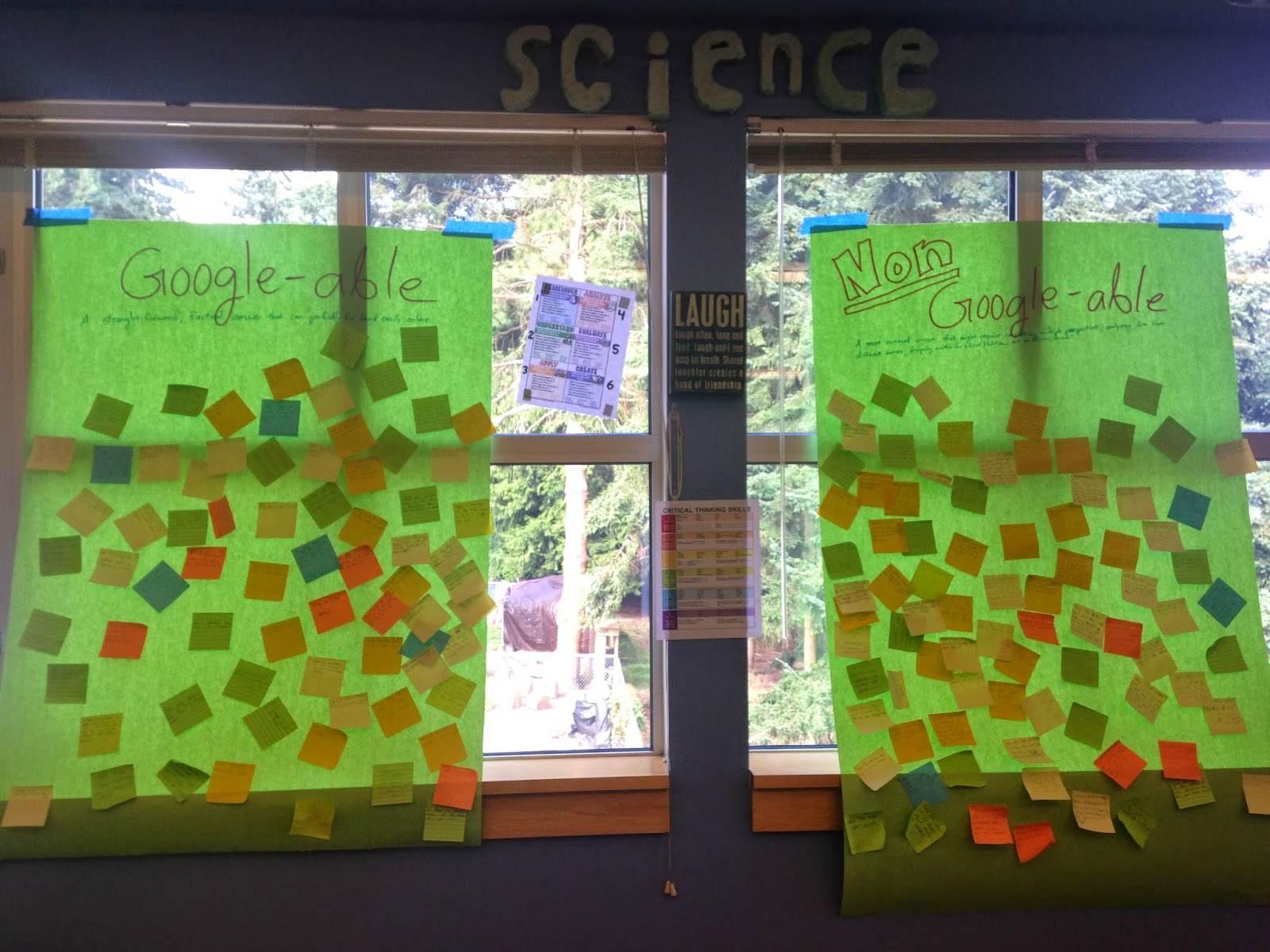 The PBL "prompt" is currently planned to be: The dams on the Elwha River used to provide local hydroelectric power. Now the dams have been removed and the ecosystem is changing.
And comments/suggestions are TOTALLY welcome!

Armed with a beginning wealth of questions, as well as practice in photographic observation and observational drawing (thanks to my awesome art colleague!), they'll collect their observations, take notes, and ask yet more questions while at camp, and return with all of their ideas and notes to ultimately craft a project that MATTERS.