Last week, after FabLearn and visiting the d.school, I visited 4 schools and their innovation spaces with my head of school and two of our board trustees, and we learned a TON more about how different spaces work for children and adults to develop their innovative thinking and crafting/construction skills.  Here are some of my findings.

Large, clear rooms but with the opportunity for division into smaller rooms.  In the pictures below, notice *every* space has extendable electrical outlets from the ceiling and tables on wheels.  Concrete floors and minimalist seating... stools.

Large glass walls separated the smaller spaces well.  Menlo School's space-separating walls were permanent, with smaller doors.  Nueva School's walls were translucent - and beautiful/colorful! - and not attached to the ground (hanging), so didn't have sound-damping effects between the rooms (a *con* for those types of diving walls!).  Castilleja School's walls had very large sliding glass doorways, and good sound damping since they slide at both top and bottom.

Parts and tool organization was also very consistent.  Small bins all stored near each other, easily removeable to be brought over to work space as needed.  Also, slatwalls at Castilleja and Nueva for easily popping in and out hooks for tools and bins for small parts.

As mentioned above, all of the schools' tables were on wheels, but the tables have very different hefts and maneuverability, as well as serve different age ranges!

Menlo's tables were smaller and more light-weight, although with larger surface area than the original d.school design.  They are intended to be student-specific, so each student or pair have their own space for a project that can be moved around to reach different tools throughout the space.  They've found that this moveability feature isn't used as much as expected, but is increasing as kids develop better habits in the space.  I *love* the idea of having enough tables that projects can be kept in situ throughout the process, but that requires an awful lots of space and tables.  This seems to work quite well for their high-school aged population.

(Both images from Menlo School)

Nueva's tables are much larger and intended for larger groups.  Their students have more difficulty maneuvering the tables, which I would guess is heavily due to the fact that their population ranges all the way down to kindergarteners.  While the tables *can* move, that functionality is not used much by the children.  They are at a height that works well for their full age-range, which is a big feat!

Finally, Castilleja's tables are quite a bit taller (more like bar-height than table-height), with a bottom shelf for short-term project storage.  With a space with less square-footage, they have fewer tables.  Castilleja's students move the tables easily for space reconfiguration, which makes sense given a middle- and high-school population.

Castilleja, Nueva, and the teacher innovation space at Los Altos School District all made use of the awesome z-rack walls highlighted in d.school's MakeSpace Book.  I think these are a clear need for any flexible-use space!  LASD also had larger-framed folding/rolling white board walls that are more difficult to maneuver than the z-rack walls and don't offer the same level of flexible space division.


(None of these sites had the awesome flip-top tables like at Hillbrook School's iLab or in Quest Academy's MakerSpace.  I'm very interested in doing something like that, although they're certainly not as *sturdy* as the big block tables.  Whiteboards that can be walls or tables?  Pretty cool...)

Ultimately, our maker/innovation spaces are all about the kids and the incredible thinking and skills that can be achieved through hands-on self-driven activities, persistence, iteration, and connections.  I just got a couple images of student projects, but they say a LOT about the incredible learning happening in these spaces. 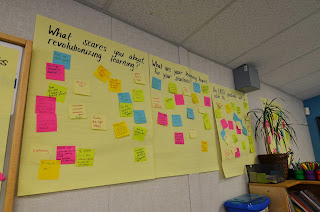 LASD's current space is organized for teacher innovation (as opposed to
student building), and their set-up is clearly leading to
some great thinking, planning, and innovative implementation in their district.
Evidence: these incredible thought boards.

While at each school (and at FabLearn), I also learned about a few fun toys to add to our repertoire... 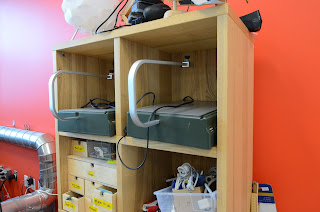 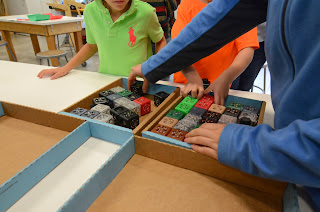 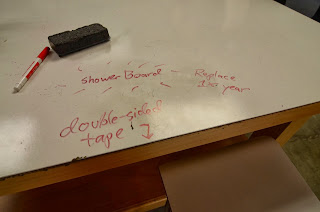 At the FabLearn Demo: Programmable Batteries.  Not yet available commercially. 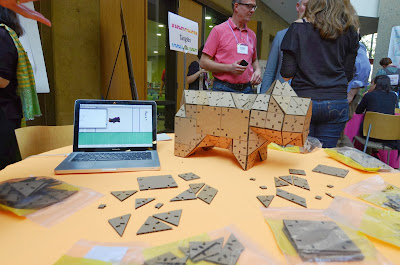 Also at the FabLearn Demo: Tangles.  Convert any 3D object
into a puzzle made of standardized pieces.
Either Laser Cut or just use Magnatiles!


If you made it this far, and you want to do even more thinking about awesome student-driven "making" in schools, I highly recommend Vinnie Vronty and Sheryl Peterson's video on the development of Quest Academy's makerspace and maker culture.  As they say in the video, you can't build the space without building the culture and pedagogy in with it.

And join the conversations on twitter at #makered and #dtk12chat !

Email ThisBlogThis!Share to TwitterShare to FacebookShare to Pinterest
Labels: Spaces